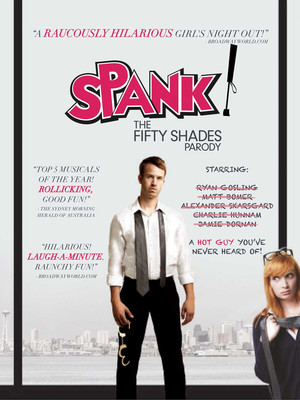 Whether you make it a date night or a girls' night out, everyone is sure to get a kick out of SPANK!

TAKING ON THE WORLDWIDE PHENOMENON

SPANK! The Fifty Shades Parody takes aim and whips (sorry) the heck out of E.L James' best-selling novels and smash hit movie, in a musical comedy that takes on all the naughty fun of the story, and brings it to outrageous life on stage! Featuring musical numbers, steamy performances highlighting the famous hunk and his grey tie, and lots of hilarious surprises, it's no wonder why this show has won over audiences across the country, with it's sharp lampooning of a worldwide cultural phenomenon.

This three-hander expertly shows a variety of characters who take on other personas. You may recognize a certain housewife spawning vampire references on a quiet weekend away from the family as she dreams up a new fictional story with steamy scenes. Except that she insists that what is coming (sorry again), is actually a retelling of her past self!

As for our intrepid virgin Tasha, how on earth has she managed so far without EVER using a computer, despite being a student at 22? And for our Hunky Hugh Hanson, why do all his family all look EXACTLY like him, yet never seem to be on stage at the same time? Beware if you're in the front few rows, as you will sure to be asked to join in some of the (safer, non spanky) hi-jinks! And you will never look at an electric toothbrush the same way again.

90 minutes with no intermission

Stay after the show for a photo with Mr. Dangerous himself and meet the cast ( not applicable on Friday & Saturday 7pm performances, sorry gals) SPANK! is not associated with, nor authorized by, author E.L. James or Vintage Press.

Seen Spank! The Fifty Shades Parody? Loved it? Hated it?

Sound good to you? Share this page on social media and let your friends know about Spank! The Fifty Shades Parody at Byham Theater.