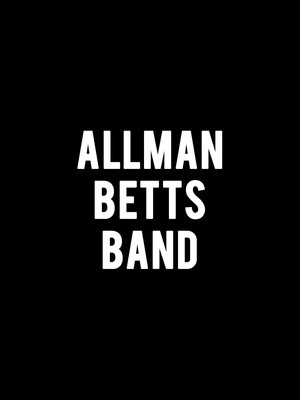 Following a busy 2018 filled touring The Devon Allman Project with Duane Betts, the sons of Gregg Allman and Dickey Betts keep the musical legacy of their fathers alive with a brand new supergroup, album and 2019/2020 tour! The band, that also consists of, Berry Oakley Jr. and Johnny Stacheka on guitar and vocals, John Ginty (keyboards), percussionist Scott Bryan and drummer John Lum, hit the road with an extensive set of dates, celebrating the release of their first LP Down To The River.

The outfit's debut was recorded at Muscle Shoals Sound Studio, a former sonic stomping ground of The Rolling Stones, Bob Seger, Paul Simon, Bob Dylan, and Lynyrd Skynyrd. Steeped in the studio's rich musical history, the album was recorded 100% analog and fuses soaring 70s rock with a sprinkling of R&B, soulful Americana and a country sounds that call to mind the Nashville and Texas scenes. The new chapter for Allman and Betts comes just in time to celebrate the 50th anniversary of The Allman Brothers Band.

thru the roof more

Great mix of traditional and new stuff. Their dads should be proud. Great... more

Sound good to you? Share this page on social media and let your friends know about Allman Betts Band at Carnegie Library Music Hall Of Homestead.