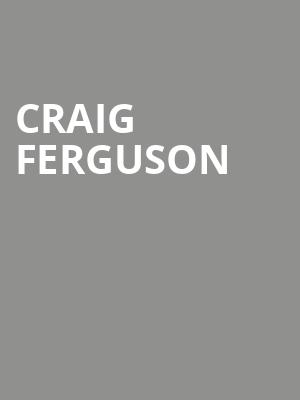 Television host, stand-up comedian, writer, actor, director, author, producer and voice artist... is there nothing this man can't do?

A champion comic of screen and stage

Whenever he has the chance, Ferguson likes to return to his stand-up roots. Let loose from the constraints of network television, Ferguson's random brain is allowed free reign over topics like his former drug addictions, sex and the stars who appear on his show. Ferguson performed his Hot and Grumpy Tour since 2013, which continued through 2014, before handing over the reigns to The Late, Late Show to fellow Brit James Corden in 2015. Don't miss this most excellent stand-up comic live on stage when he performs at near you soon!

One of Scotland's best exports (after whisky)

One of Scotland's most acclaimed comedians, Craig Ferguson first became known to American audiences as Nigel Wick, Drew Carey's evil boss on The Drew Carey Show. A fixture of the series from 1995, Ferguson won over film audiences four years later with his portrayal of indefatigable hair stylist Crawford Mackenzie in The Big Tease.

He became a household name when he took over as host of CBS's Late Late Show in 2005, replacing Craig Kilborn. His show was a noticeably more anarchic and free form version of the standard late night talk show format. In addition he has lent his voice to several top animated movies including How to Train Your Dragon and HTDYD2 as the irrepressible Gobber and Disney Pixar's Brave as a fiesty Celtic clan leader.

Suited for audiences 16+ due to mature themes and strong language

My husband and I had a great night seeing Craig. I enjoyed watching my... more

Sound good to you? Share this page on social media and let your friends know about Craig Ferguson at Carnegie Library Music Hall Of Homestead.