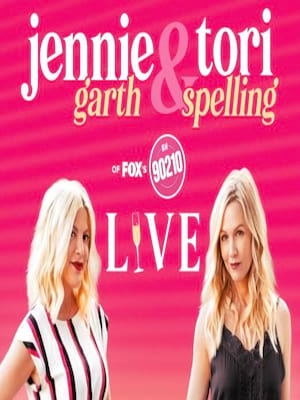 Jennie Garth & Tori Spelling Live: A Night to Remember is bringing the ladies of 90210 to zip codes across America for the ultimate girls night.

Actresses Jennie Garth and Tori Spelling will join forces this November for a live talk show tour commemorating and celebrating memories from their famous careers beginning with Beverly Hills, 90210 during the '90s. Fans of the show can't miss this rare opportunity to get up close to some of its biggest stars!

Jennie Garth first rose to fame after playing Kelly Taylor on popular show 90210 and has since starred in her own reality TV show 'Jennie Garth: A Little Bit Country' and received the Young Artist Award for Best Young Actress Co-starring in a Television Series for 90210 in 1992 and a Prism Award for Outstanding Performance in a Miniseries in 2008.

Tori Spelling played Donna Martin on TV show 90210 and went on to appear in many made for TV films after. The actress' autobiography debuted at the top of the New York Times Best Seller list. It was also named as the best celebrity autobiography of 2009.

Amy: “Disorganized show had no focus ”

As I was a fan of 90210 I was looking forward to seeing this show and always... more

Sound good to you? Share this page on social media and let your friends know about Jennie Garth and Tori Spelling Live at Carnegie Music Hall.