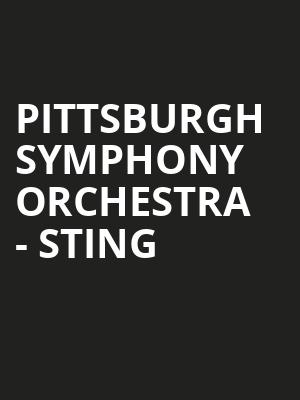 Join Sting and the Pittsburgh Symphony Orchestra for this extra special concert that sees the pop icon's greatest hits get the symphonic treatment. Expect to hear unmissable arrangements of some of his popular songs of the past forty years, from 'Roxanne' and 'Walking on the Moon' to 'Fields of Gold' and 'Englishman in New York'.

Alongside his hits, Sting has never been afraid of taking some more left-field turns, such as his flute music albums and his foray into Broadway musicals with The Last Ship. With millions of albums sold worldwide and 16 Grammy Awards to his name, it's clear this willingness to explore music's various pathways has kept him at the forefront of the conversation.

Sound good to you? Share this page on social media and let your friends know about Pittsburgh Symphony Orchestra - Sting at Heinz Hall.