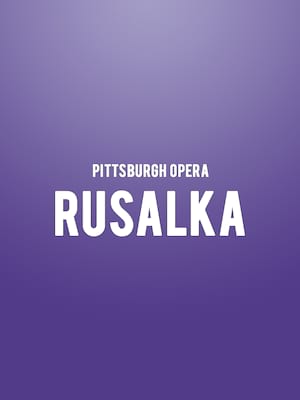 Before the Little Mermaid, there was Antonin Dvorak's Rusalka, a Slavic fairy fable about an ethereal water nymph that chooses a life on land to win over her true love, the Prince. Brought to vivid life by Dvorak's exquisite melodies and the evocative language of Czech poet Jaroslav Kvapil, the Pittsburgh Opera presents a brand new production conducted by the ensemble's music director designate Antony Walker and directed by respected opera maker Kristine McIntyre (Moby Dick, Dead Man Walking).

What is Rusalka About?

Russian soprano Ekaterina Siurina dazzles in the titular role of the water spirit alongside American tenor Evan LeRoy Johnson as her lover. When Rusalka falls in love with the very much human prince after spying him hunting around her lake home, she tells her father of her plans to become human to embrace him. He tells her it's not a good idea, but ultimately supports her, sending her to a witch and ultimately her doom...

Sung in Czech, with English supertitles projected above the stage at all performances

Sound good to you? Share this page on social media and let your friends know about Pittsburgh Opera - Rusalka at Benedum Center.