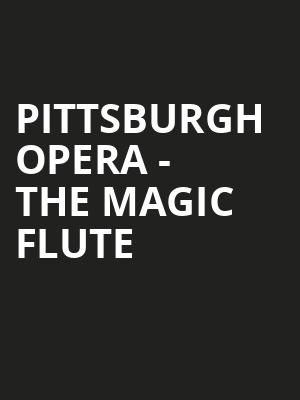 The bustling chorus handled their scenes at the opening and close with polish.

In November Pittsburgh Opera presents Wolfgang Amadeus Mozart's most famous opera, The Magic Flute! Telling the tale of Prince Tamino and his sidekick Papageno the bird catcher on a heroic journey to rescue Princess Pamina, it's an enchanting masterpiece which has been enjoyed by both adults and children for centuries.

The conductor is Glenn Lewis, Pittsburgh Opera's Head Of Music since the 2007/2008 season. Previously spending over a decade conducting in Germany, since returning to the USA Lewis has worked with the Kennedy Center, Vancouver Opera and others, as well as his combining his duties at Pittsburgh with regular post at the Santa Fe Opera.

Sound good to you? Share this page on social media and let your friends know about Pittsburgh Opera - The Magic Flute at Benedum Center.