Sorry! You missed Rock Of Ages at Benedum Center 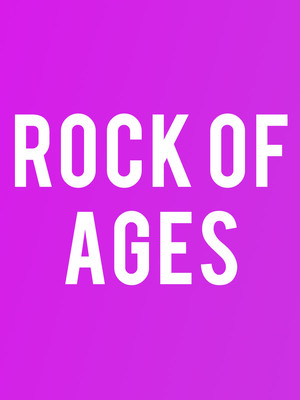 ROCK OF AGES is the power-ballad decade in all its glory, tricked out with big perms, bigger dreams, and the kind of operatic ecstasy you read about only in bathroom stalls

Why See Rock Of Ages?

Rock and Roll underdog Stacee Jaxx is back and ready to set the stage on fire in a blaze of glory! A decade after shaking up Broadway with its no-holds-barred bacchanalia and winning score drawn from classic rock's greatest hits, The Rock Of Ages is once again hitting the road on its Tenth Anniversary Tour, showing the smartphone generation exactly how it was done in the 80s. Break out the spandex and pleather, cause this is one nostalgic show you won't want to miss!

Debuting on the Great White Way in 2009, Rock Of Ages ran for a staggering 2328 performances before taking a bow in 2015, garnering five Tony Award nominations. The heady jukebox musical is a tribute to all things glam rock, using the music of Styx, Quiet Riot, Twisted Sister, Def Leppard and Kiss amongst others, to tell the story of the dying days of Sunset Strip and the undying dreams of the last rock and rollers.

What is Rock Of Ages About?

The time: 1987. The place: West Hollywood's Sunset Trip. Amidst the tussle between hedonistic thrill seekers, a fed-up city planner and developers looking to turn the spot into a clean-living, money-making area, dreams still blossom - at least in the minds of Drew Boley and Sherrie Christian. A busboy at the legendary Bourbon Room, Drew has his sights set on becoming a rock star whilst new colleague and romantic interest Sherrie dreams of being an actor.

When they learn the Bourbon room is set to be demolished, they take matters into their own hands whilst Drew embraces his inner rock god, becoming Stacee Jaxx with every flaming lick. It's dirty, it's unapologetic - it's a coming of age tale with the kind of swagger that'll turn your parents' hair grey!

Two hours and 30 minutes including one intermission

It was outstanding, enjoyed it. Young man that did the lead was fantastic.... more

The story was great, the music and acting was great and the clothing... more

Sound good to you? Share this page on social media and let your friends know about Rock Of Ages at Benedum Center.