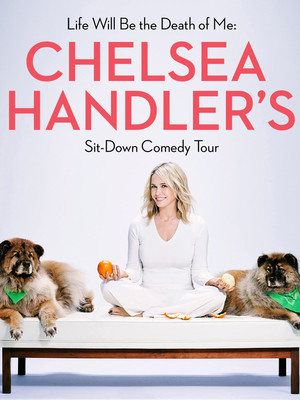 Life Will Be the Death of Me promises to be her most disarmingly honest book to date.

An Evening with Chelsea Handler

Comedian, author and activist Chelsea Handler returns for an evening of stand-up comedy and engaging conversation - no topic is taboo! She's back in 2020 with another round of dates for her 'Life Will Be The Death Of Me', supporting her hit autobiography slash memoir of the same name. Join Handler for a brilliant night of stand-up, covering topics close to her heart - from Donald Trump to her two beloved pet dogs!

Having ended her Netflix chat show, Chelsea, in late 2017 she announced that she was pursuing political activism. Handler is known to her fans as being an open book, one who's willing to dish out personal stories of one night stands, DUI's and her relationship with alcohol and share them with the world. This evening will give you the audience a chance to learn a little bit more about Handler, and the topics closest to her heart!

Thank You Chelsea, I enjoyed your viewpoints and your message. Everyone... more

Craig Solum: “Interesting dialog, but not a lot of substance.”

I thought the "show" was somewhat thought provoking but only glazed over... more

Sound good to you? Share this page on social media and let your friends know about Chelsea Handler at Byham Theater.