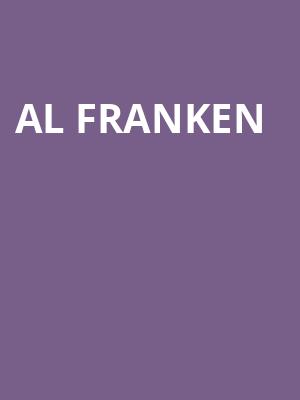 Whether discussing his career in comedy or in public service, Franken delivers a singular experienceleaving audiences thoroughly entertained, more knowledgeable, and either optimistic or extremely depressed about our nation's future - depending on how he

GET the Inside Scoop

Award-winning comedian, media personality and former senator Al Franken heads on a nationwide tour where audiences will get a first-hand insight into the public figure's fascinating life. From his start as a writer on SNL during the '70s and '80s to his time as a senator in Minnesota to his two Grammys, five Emmys and four books that hit the New York Times #1 best-seller list, Franken will have plenty to talk about.

The New York native is well known for his left-wing talk show, 'The Al Franken Show' which aired from 2004 to 2007. The show interviewed voices who were known for their left-wing views and provided commentary that spoke out against the George W. Bush Administration who were in office at the time.

This tour comes just after Franken's resignation as a senator and illustrates his parting words "I may be giving up my seat, but not my voice."

Sound good to you? Share this page on social media and let your friends know about Al Franken at Carnegie Library Music Hall Of Homestead.