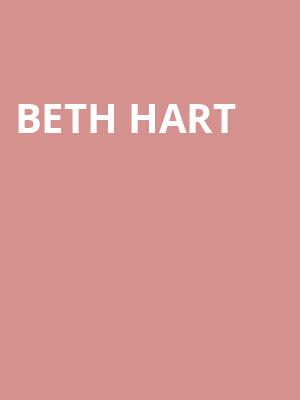 This is a distinctive, ambitious record that takes advantage of her natural talents in surprising ways.

All Music (Better Than Home)

This Grammy nominee and Musical star!

The 2014 Grammy nominated blues singer heads back out on tour! Springing to fame in 1999 with the hit moody blues single LA Song, Beth's music is featured in various television shows such as Californication and the remake of Beverly Hills 90210. In 2014 Hart was nominated for a Grammy Award for her album Seesaw and her latest album Better Than Home was released to high praise and topped the iTunes Blues charts on its release in 2015. She has collaborated with various musical luminaries including Slash, Joe Bonamassa and Buddy Guy.

As well as her successful music career, Hart in fact performed off-Broadway as Janis Joplin in the musical Love, Janis, based on letters that Joplin had written to her mother. She has also lent her voice to 2015 documentary Unity, featuring more than 150 artists, businessmen, athletes, actors and military personnel.

Sound good to you? Share this page on social media and let your friends know about Beth Hart at Palace Theatre.