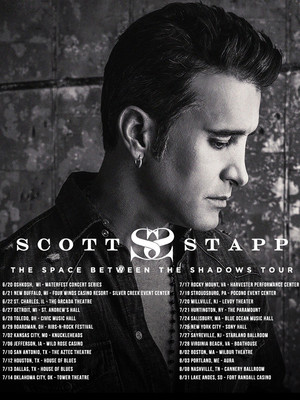 Scott Stapp returns with The Space Between the Shadows!

The Space Between The Shadows Tour

After some difficult years Creed frontman Scott Stapp is back with a brand new album, a new tour and sobriety. Marking five years since the artist released "Proof of Life", and five years sober, Scott Stapp is celebrating his new lease of life with 2019's The Space Between the Shadows!

Finding fame as the lead singer of rock-supergroup Creed in the mid-'90s, Scott Stapp became an overnight sensation. Creed's 2001 multi-platinum album, Weathered, signalled the end of the band's time together with the group going their separate ways after a somewhat controversial gig in Chicago. Stapp decided to head out on his own 2004 and released his debut solo album, "The Great Divide". The album proved a huge success and saw the troubled songwriter hit the top 20 in the US charts and garner another Platinum album.

Sound good to you? Share this page on social media and let your friends know about Scott Stapp at Palace Theatre.