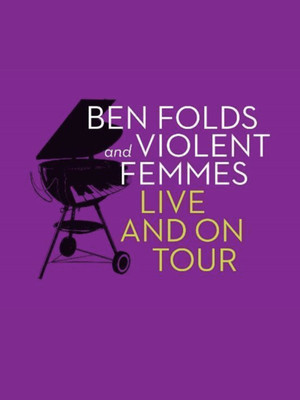 Over the past five or so years, the pianist, songwriter and arranger (Folds) has made an art form out of consistently challenging and stretching the possibilities of his own repertoire.

In a pairing that no one saw coming, Cult 80s alt rockers The Violent Femmes join forces with power pop indie icon Ben Folds for a surprise, 14-date, co-headline North American tour this summer! Multi-talented singer songwriter Folds first rose to national attention as frontman and pianist of indie rock trio Ben Folds Five, which paved the way for a long and illustrious solo career with highlights including collaborations with William Shatner, Regina Spektor and even author Neil Gaiman. Recently, Folds took on the state of US politics with his satirical Trump-criticising single 'Mister Peepers'.

Formed in 1981, The Violent Femmes were hailed as the most inventive and original bands of the decade of decadence thanks to a pioneering independent spirit and a heady blend of folk, punk, spirituality and sarcasm. Whilst they did not make a commercial impression at the time, they became the chosen soundtrack for angsty teens everywhere thanks to irascibly intelligent anthems 'Blister In The Sun', 'Kiss Off' and 'Gone Daddy Gone'. In 2016 they released their ninth studio album 'We Can Do Anything'.

Love the Ascend Amphitheater. Loved the Violent Femmes set. They were... more

Sound good to you? Share this page on social media and let your friends know about Ben Folds and Violent Femmes at Stage AE.